NOTE: Beneath the end of the list, you can find the posters and details about each movie selected.

One of the brightest examples of a movie adaptation doing justice to the original source, Daniel Espinosa's Easy Money is based on the titular first novel of the "Stockholm Noir" trilogy, written by the Swedish criminal lawyer and crime writer Jens Lapidus. Both the books and the films have been more than well-received by the global readership and audience, reinvigorating the saturated sub-genre of the so-called gangster fiction. Lapidus dives deep into Stockholm's underbelly, picking his protagonists from a pool of thugs, crime kingpins, as well as members of the above-suspicion upper-echelons of the Swedish society that are intertwined with the underworld with money constituting the bonding link between the two. JW, Mrado, and Jorge are portrayed in a way that is consistent with Lapidus's characterization and the actors, Joel Kinnaman, Dragomir -"Gago"- Mrsic and Matias Varela breathe life into their respective roles, delivering solid performances that are deemed memorable by the audience. The film's plot connects the lives of these 3 protagonists whose roads intersect and during the story's climax some of them will not walk away unscathed. The next two novels have found their respective film adaptations in Babak Najafi and Phillip Argeadson's 2012 Easy Money 2: Hard to Kill and Jens Jonsson's 2013 Easy Money: Life Deluxe that concludes the story and the sub-plots permeating the totality of the trilogy. Espinosa's film is the best of the three, keeping the basic story premise and characters from the book and providing an honest representation of the gangster lifestyle without shying away from the dangers, in terms of narrative plausibility, that it entails. It should be added that in 2021 a spin-off series under the same title was aired with Lapidus collaborating in the screenplay.

Based on the collection of short stories and novellas written by one of the most talented Swedish wordsmiths regardless of genre categorization, Håkan Nesser, a name very well-known to the fans of Scandinavian crime fiction as the creator of the prolific Van Veeteren book series, Intrigo: Death of an Author is an adaptation of the first story in the compilation, directed by Daniel Alfredson (The Girl Who Played with Fire, The Girl Whp Kicked the Hornet's Nest). The movie casts the veteran English performer Ben Kingsley as well as the German Benno Fürmann and the Swedish popular actress Tuva Novotny, all giving their best in their respective roles, adding artistic value to the production as a whole. The film's plot revolves around the enigmatic persona of a recluse author, Germund Rein, whose last manuscript arrives at the publishing house in which the protagonist, David (B. Fürmann) works as a translator. It seems that Rein's prospective novel is as mysterious as its creator as it hasn't been published in its country of origin while it is abetted with a letter which arrogates that the book is not to be printed in its original language. David will embark on a journey spanning several years and countries in order to solve the riddle of Germund Rein and the final revelation will leave him awed. The plot is labyrinthine, though never confusing, and the viewer is in for a treat, letting himself be seduced by one of the most gifted European storytellers of our time. The Intrigo movie franchise has been extended with two more films (Intrigo: Samaria and Intrigo: Dear Agnes) each corresponding to a short story of the original source.

Jussi Adler-Olsen is one of the most celebrated contemporary Danish crime writers and his "Department Q" series, consisting of 10 books in total, narrating the investigations conducted by a special team within the Danish police headquarters dealing with the so-called "cold cases", unsolved crimes that have been archived due to lack of evidence. The Keeper of the Lost Causes is the first installment in the saga, introducing the quirky Adler-Olsen's protagonists, the detective in charge of the small department, Carl Mørck, a rather dull and one-dimensional persona and his sidekick, Assad, an Arab whose misuse of the Danish language offers some much-needed moments of comic levity in the, otherwise, dim storylines. Nikolaj Lie Kaas, one of the most respected and talented Danish actors of his generation, and Fares Fares, as Carl and Assad respectively, prove to be the perfect choice for materializing Adler-Olsen's unconventional protagonists, while the film's director, Mikkel Nørgaard, and screenwriter, Nikolaj Arcel remain faithful to the story as told in the novel, with little alterations of minimal significance. The plot revolves around the disappearance of a promising female politician, Merete Lyngaard (Sonja Richter), that took place five years earlier. Carl and Assad will have to find ways to communicate and collaborate in order to unveil the truth and the finale will find them facing dire predicaments. The film's narrative style that includes the extensive use of flashback sequences, and pacing are exemplary for a police procedural that, many times, feels closer to a thriller. The production values are high and the franchise of the "Department Q" (in Danish: "Afdeling Q") movies continued with 3 more films featuring the same actors in the roles of the two protagonists. Lately, in 2021, the adaptation of the fifth installment in the series was released, with the veteran Danish actor Ulrich Thompsen as Carl and Zaki Youssef as Assad, however the production can't stand at the same level with the previous four movies.

Åsa Larsson is one of the lesser-known Swedish crime writers, mostly known through her Rebecka Martinsson novels that have been adapted into television series (Rebecka Martinsson: Arctic Murders), having aired 2 seasons so far. However, the first adaptation of Larsson's work took place in 2007 when Leif Lindblom directed a feature film version of the first novel in the Rebecka Martinsson series, titled Solstorm. Larsson set her books in the frozen town of Kiruna, the northernmost municipality in Sweden, known mainly for the local mine which is "the largest and most modern underground iron ore mine in the world" (Wikipedia). The small, tight-knit community trope is strongly present in the books and Solstorm chronicles the first murder investigated by Rebecka, who is a hotshot Stockholm criminal lawyer in profession, and for which the prime suspect is one of Rebecka's best childhood friends. Thus, is forced to return to the place in which she grew up and has to swallow her reservations about revisiting the people of the local community that she left behind for good many years earlier. The reason for Rebecka's hostility toward the locals is explained in the course of the film and her personal story is in a way linked to the murder case as the victim is her former boyfriend and new-age priest, Viktor (André Sjöberg). Izabella Scorupco, born in Poland but raised in Sweden, plays Rebecka in a convincing performance aided by her stunning looks. More eminent Swedish actors are framing the cast such as Mikael Persbrandt, Jakob Eklund and the Finnish Antti Reini. The story is certainly not distinguished for its originality and a naive finale makes things feel even worse to the experienced audience who has relished many similar silver screen productions. Nevertheless, the desolate setting and the acting level deem Solstorm a noteworthy movie that, additionally, offers to the audience the chance to know a legendary fictititous character of the Swedish crime fiction literature.

Jo Nesbo's standalone namesake novel becomes the rich source material upon which director Morten Tyldum, aided by the exemplary work of the two screenwriters, Ulf Ryberg and Lars Gudmestad, structures one of the most compelling Norwegian thrillers of the 2010s, starring Aksel Hennie in the role of Roger Brown, a professional headhunter, or a human resources manager if you prefer, who moonlights as a thief of precious works of art. The problems for Roger will begin when he breaks into the wrong house belonging to a trained assassin, Clas Greve (Nikolaj Coster-Waldau), who, adding insult to injury, has an affair with Roger's wife, the ethereal Diana (Synnøve Macody Lund). Roger and Clas will play a cat-and-mouse game with Clas always being on the offensive and Roger running for his life, a situation that will be turned on its head only in the, brilliant, final scene that upends the story as told theretofore, reminding us why Jo Nesbo is rightfully considered to be one of the most exceptional crime writers in the whole world. The fast pacing and tight script leave no room for the audience to breathe a sigh of relief as Roger, the character for whom we are rooting, is never safe throughout the course of the film. The omnipresent tension renders Headhunters one of the most electrifying European thrillers of the last decade and it is a must-watch, especially if you claim to be a loyal fan of the genre. If Nesbo failed to see his story realized on screen with the irreverent Snowman (2017), he was lucky enough to watch one of his lesser-known works materialize on the silver screen in this Norwegian production. 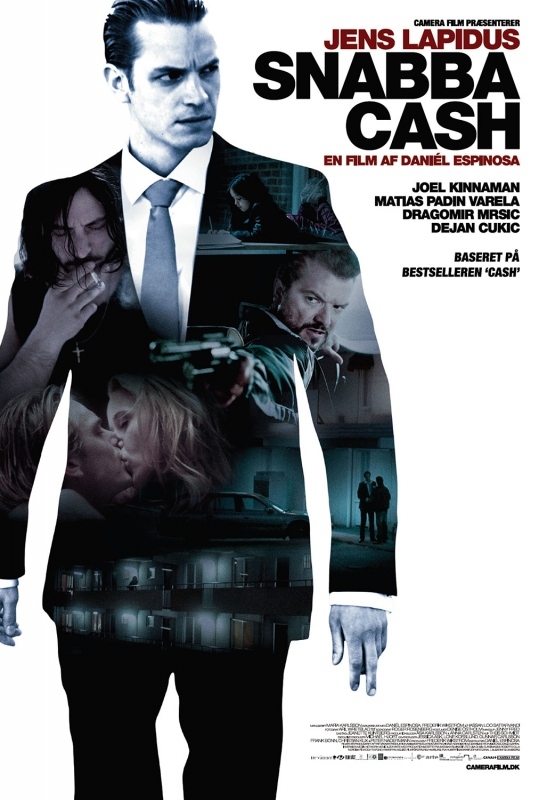 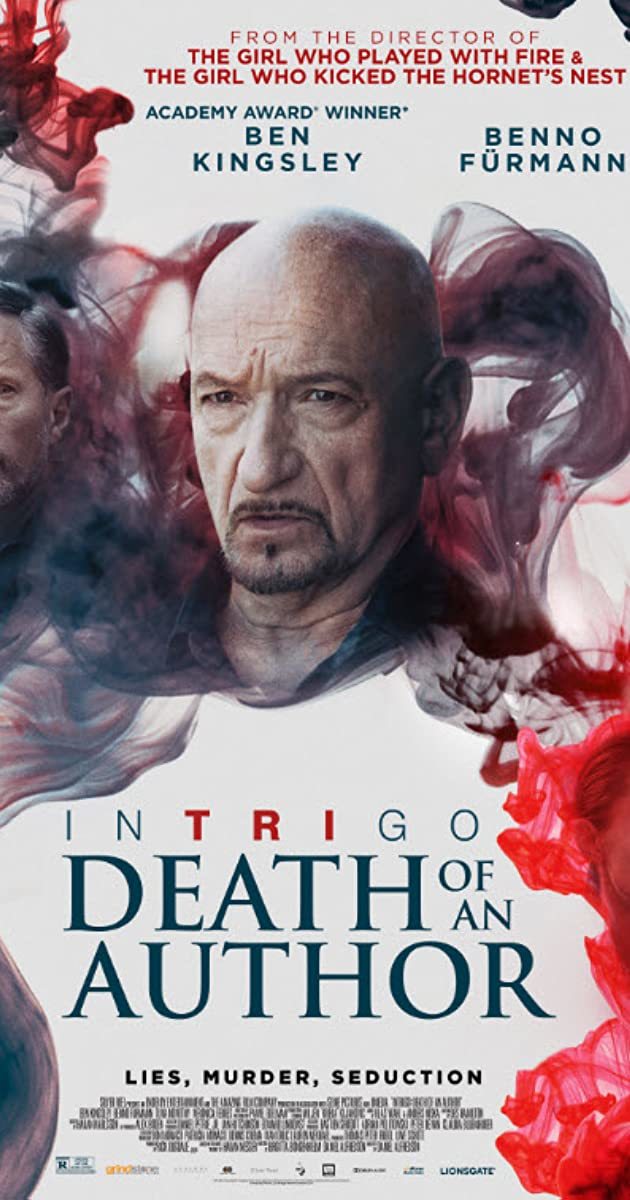 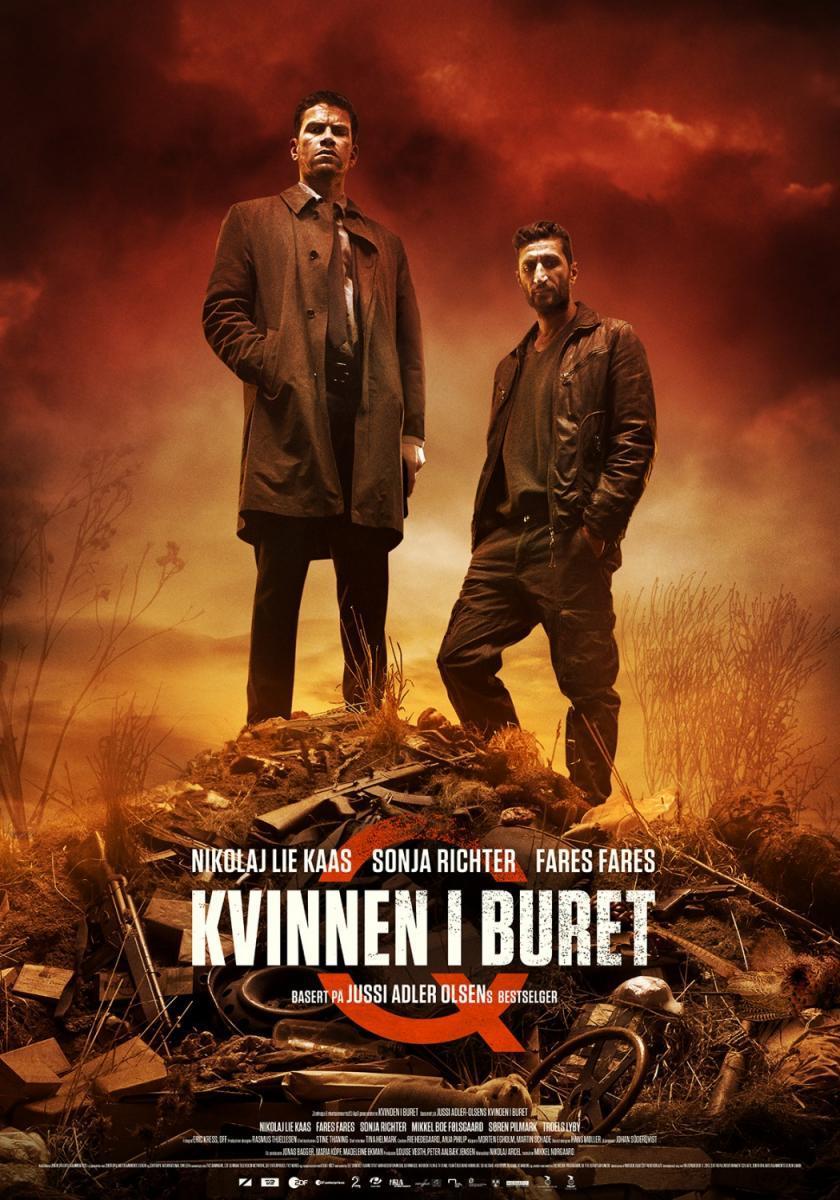 The Keeper of the Lost Causes 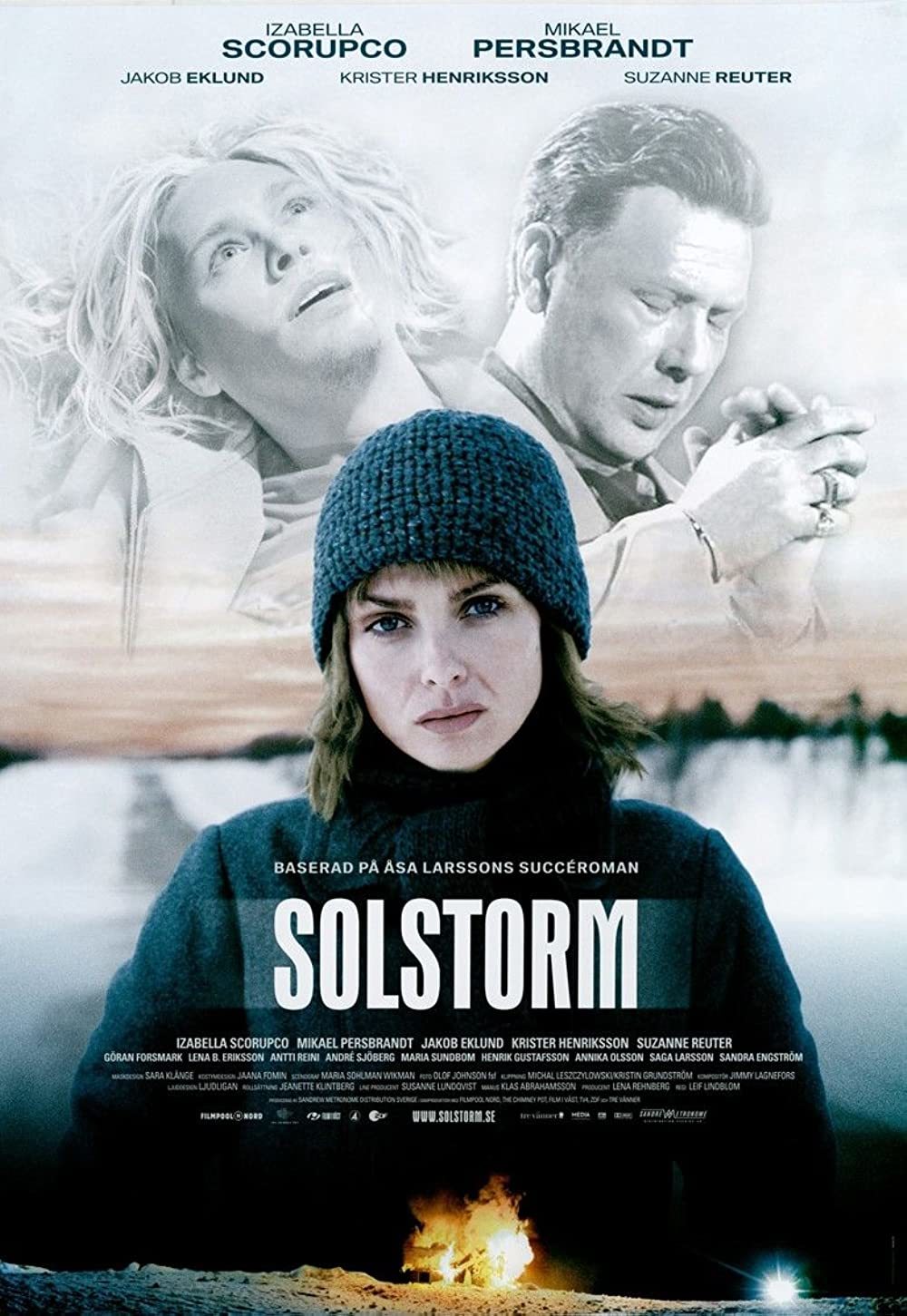 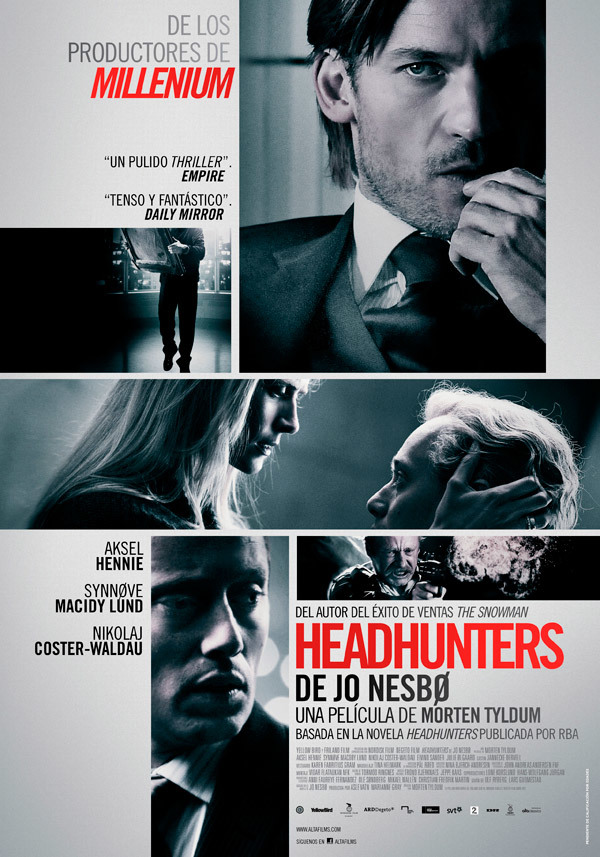