A dignified dramatization of a horrid terrorist attack.

This movie is a dramatization of the tragic events which took place in Oslo and the little island of Utøya on 22 July 2011. Paul Greengrass, a director who made some similar attempts at bio-drama the past few years (United 93, The Murder of Stephen Lawrence) devotes his attention to both the protagonist Anders Behring Breivik, played remarkably by Anders Danielsen Lie (Oslo, 31 August, Mammon) and of course the victims and their families. Jon Øigarde also delivers a well-measured performance of Breivik's lawyer, Geir Lippestad. The director chose Norwegian actors speaking English something that works perfectly well and adds to the realism of the movie. Furthermore, the role of government and Norwegian politicians is examined thoroughly, emphasizing on the reactions of the country's prime minister.

The movie is based on the, extraordinarily well- investigated, Åsne Seierstad's book, One of Us: The Story of a Massacre and its Aftermath, the most honest, thus disturbing, account of the murder of 77 people in Oslo and Utøya. The actual event of the Utøya's executions is really well-shot with the English filmmaker keeping a distance from the horrible atrocities depicted on screen and as a result, the movie may seem cold and sterile but not in a negative way. It is somehow the most appropriate feeling that the viewer should embrace in order to endure such a tough subject. Greengrass tries to be as neutral as possible to avoid Breivik's demonization and avoids making any kind of value or moral judgments. He lets the events speak for themselves and he succeeds in creating a dignified movie with respect to both the truth and the victims. To conclude, 22 July is a movie worthy of your time and attention and you should definitely check out if you are interested in the true crime genre and the terrible events that happened in Norway in 2011. 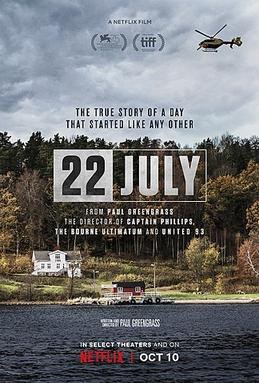