A decent Belgian crime/thriller series with a massive twist.

I've enjoyed much Belgian crime TV series in the past, such as The Break, Salamander, De Dag, and others, so I was eager to watch 13 Commandments (original title: 13 Geboden) even though it is a rather lengthy show for my taste (13 episodes in total). The story is a classic serial-killer police procedural with a killer nicknamed "Moses" by the press who tortures his victims without killing them but leaving them traumatized and scarred for life. The plot is moving forward in a fast tempo and there is a colossal twist in episode 10 that leaves the viewer aghast. After that, you see the story from a different perspective. While it sounds, and on a certain level truly is, another formulaic crime show, 13 Commandments has some merits that make it stand out positively. The characters are nicely outlined, especially the two protagonists, Peter and Vicky, each having their problems and troubled past. Furthermore, I found Dirk van Dijck's performance as Peter to be outstanding and after finishing watching this one, I instantly searched his filmography to see more of his work. The production values of the show are at a high level, as always in the Belgian cinema and television productions and overall I can safely say that 13 Commandments is a binge-worthy series and many of you will watch it in one or two sittings. 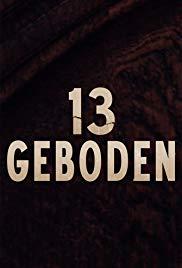