So much more than a remake.

Nikita Mikhalkov is the son of the famous Russian poet Sergey Mikhalkov and also one of the most alluring contemporary Russian auteurs. His films are known for their deep humane mood and feeling, always focusing on the personal aspect and the character(s) who are portrayed in the fine Russian tradition of the great Russian literary authors like Fyodor Dostoyevsky, Anton Checkhov, Leo Tolstoy, etc. 12 is a remake of the popular American movie 12 Angry Men (1957), directed by Sidney Lumet and starring Henry Fonda in the role of the protagonist, Juror no. 8. In Mikhalkov's movie, which was nominated for Oscar for Best Foreign Language Film (2008), it is Sergey Makovetsky who plays the incessant, solemn juror who dares to disagree with the initial unanimous guilty verdict decided by his peers. The story of the original is kept -almost- intact in this remake, but the dialogue, as well as the character development, stand on a higher level of quality. It is those differences that make 12 one of those rare cases where the remake is a better film than its predecessor which in turn is deservedly considered to be one of the classic American movies of the 1950s. So, in general terms, Mikhalkov's version is a cornerstone achievement for the Russian cinema, a film that is deemed by many as the director's best so far.

The story's setting is nearly identical to that of Lumet's 1957 picture., though some of the plot elements are identical to that of 12 Angry Men or slightly altercated to fit the modern Russian reality. A young man, in his late teens or early twenties, is arrested for the brutal murder of his father by stabbing. Though, in this case, the kid is of Chechen descent and the father a Russian military officer who has adopted the kid a long time ago. This minority dimension in the plot fuels several of the movie's dialogues because Russians are more than prejudiced against Chechens as they are responsible for several terrorist attacks in their country's domain in the last decades. The theme of racism is further explored by Mikhalkov as some of the jurors are of Jewish background, a fact that creates further tension between the twelve jurors and allows some of them to hurl acidic antisemitic comments and remarks. The evidence against the young man is overwhelming and at first, the jurors seem to completely rule out the notion that the kid may be innocent. It is only Makovetsky's character who is bold enough to sow the seed of doubt in his eleven peers whose initial reactions to his observations are incredulity, almost bemusement, and mockery directed to juror no. 1. Nevertheless, as the plot unfolds, the remaining jurors contemplate the case over and over and in the process, they find out more and more inconsistencies in the prosecution's story. One by one they begin to endorse the odd juror's theories and the situation is quickly reversed.

If juror no.1 is the protagonist in 12, then his counterweight and antagonist is Sergey Garmash's character who is stubborn and refuses to even hear a different opinion on the matter of the final verdict. It should be mentioned that for Garmash a dream came true in 12 as it was the first time that he collaborated with Nikita Mikhalkov who respects profoundly. For his character, the Chechen youngster is an unrepentant killer and should be sentenced to the most severe punishment established by the legal system. Garmash is a renowned actor in his country and has taken part in more than a hundred movies. The tense dialogue between Garmash and Makovetsky ought to be studied by other directors who wish to build three-dimensional, plausible characters and at the same time add hidden layers to them that will be revealed in the course of the movie's running time. Mikhalkov interjects some great monologues given by each of the jurors and through them, the audience can get a glimpse into their unique perspective, their memories, and the events that stigmatized them forever. There are many genuinely emotionally touching scenes in this film which is shot almost exclusively in one room, with the only exception of a few interjecting flashback scenes from the life of the accused and is based exclusively on its superb script. 12 credits three people as screenwriters and one of them is Nikita Mikhalkov himself, along with Vladimir Moiseenko and Aleksandr Novototskiy-Vlasov. It is a must-see for every true cinephile either he is familiar with the original version or not. If you enjoy character-oriented, dialogue-based crime films then you are in for a treat with this one.

NOTE: "The movie has an epigraph ("Don't look here for the truth of everyday life, but try to feel the truth of being") and an epilogue ("The law comes before everything, but what's to be done if the mercy comes before the law?"). Both are quotations from one B. Tosia. Most probably, he (or she) never lived and is the fictional alter ego of Nikita Mikhalkov". (IMDB Trivia) 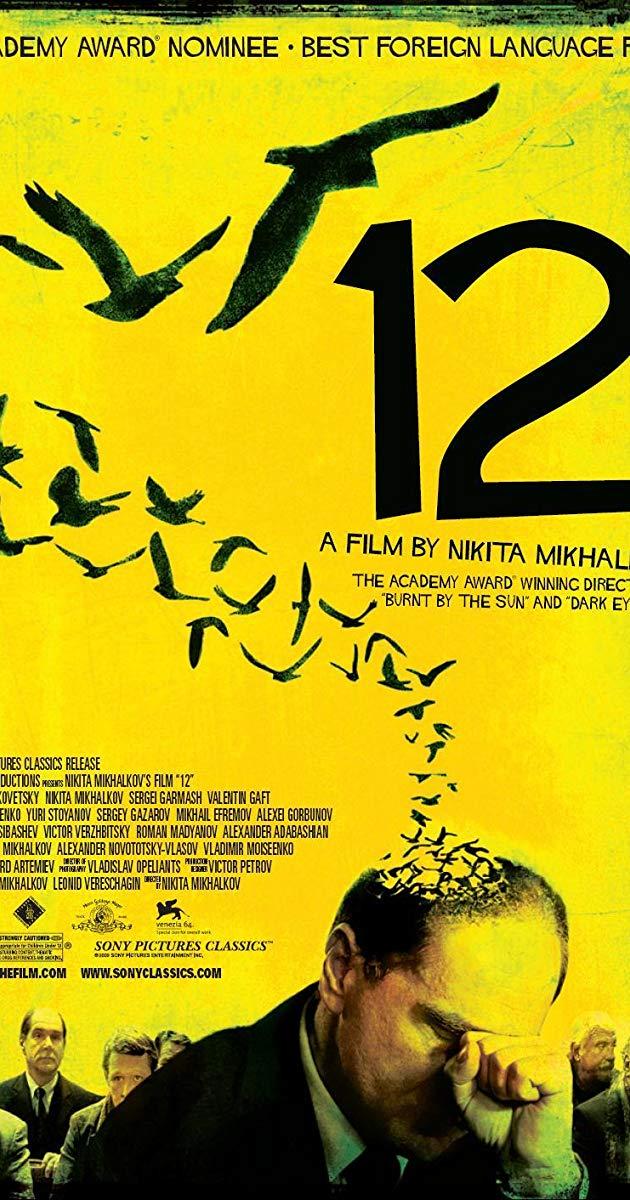