An ambitious Finnish debut novel that leaves a bittersweet taste. 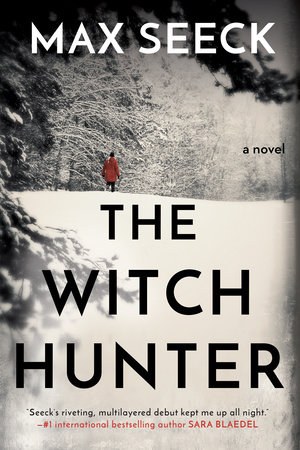 This is the debut novel by the Finnish author, Max Seeck, an avid reader of Nordic noir who enjoys listening to movie soundtracks as he writes. The Finnish contribution to the genre is not as popular as the Swedish or Danish, but in recent years authors such as Jarkko Sipila, Antti Tuomainen, Kati Hiekkapelto, and Lena Lehtolainen delivered some great samples of crime fiction that put Finland on the map of Nordic noir. The Witch Hunter is a blend of the classic police procedural and horror fiction, though the final result seems to be unbalanced as the book mainly revolves around the police investigation of a series of grisly murders in Helsinki. The horror element is limited to a handful of pages describing the gory details of the homicides that initially seem to be related to the notorious witch hunt of the Medieval ages. There are not many Nordic crime writers who dare to integrate the supernatural horror dimension in their work, the most popular being John Ajvde Lindqvist who rocked the boat with his critically acclaimed Let the Right One In, nevertheless, Seeck tries real hard in his first novel to create a terrifying atmosphere that is destined to haunt the readers. In other words, the author struggles to deliver a book that introduces a twist on the average Scandi-noir offerings.

The book begins with the murder of Maria Koponen, wife of a successful thriller author, Roger Koponen, whose trilogy on modern-day witch hunting made him rich and popular around the world. Maria is found dead in her house in the posh neighborhood of Kulosaari and posed in a manner that leads the police to think that this is some kind of ritualistic murder. The grotesque smirk on the deceased woman's face prompts the chief investigator, Jessica Niemi, to search on Roger's body of work for similar homicides. When a second body is found, buried under the ice near the Koponen's residence, the investigative team becomes convinced that somebody imitates the murders described in Roger's books and that the carnage will be continued. Jessica and her colleagues will have to race against time as more bodies are soon discovered in the greater Helsinki area and she will gradually grasp a rather disturbing truth: that she may be one of the targets of the killer(s) for some reason that has to do with her past.

Jessica is the protagonist in The Witch Hunter and she is a convincing character, reminiscent of other hard-boiled female heroines featured in the Nordic noir genre like Mia Kruger, Molly Blom, and Sarah Lund. She is stubborn and dedicated to the force while she is ready to do anything necessary in order to close the case at hand. At the same time, she has a past that is filled with secrets and some of them are revealed to the reader through an interjecting past narrative that chronicles Jessica's tempestuous relationship with an Italian violinist, Colombano, in Venice. This past storyline acts as a backdrop that helps the reader to better comprehend Jessica's character. Furthermore, there are more hints that Jessica is hiding the truth from her friends and colleagues regarding her financial situation, though I think that we will read more about that in the next installments in this new series.

The pacing is fast, with short chapters and a dense plot that unfolds through a multiple perspective narrative. The main drawback of The Witch Hunter is that the author doesn't seem certain about the identity of his novel. Whereas, the first pages prepare the reader for a Stephen King-like horror/thriller, what follows is the detailed portrayal of the police investigation that lacks the necessary edge to satisfy the loyal fans of the genre. I would read the second part in the Jessica Niemi series, though, I have to confess, it wouldn't be my first choice on my reading list.