A literary mystery on poetic inspiration by one of the genre's pioneers. 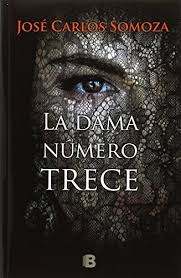 This is the second book by Jose Carlos Somoza that I've read, the first one was the fascinating Zig Zag, and even though it was an easy read, I have to admit that it was less captivating than I expected by the Spanish psychiatrist and literary crime fiction author.

The story is engaging in its premise, it concerns the story of a young professor of literature, Salomon, and a Hungarian prostitute, Rakel, who begins to have bizarre dreams about people getting murdered in horrendous ways. They soon find out that these killings are connected to the sect of the 13 women who instill the poetic inspiration in writers around the world. There is a vast number of poetry references from John Milton and Friedrich Hölderlin to Paul Valery and Federico Garcia Lorca, something that adds to the story's quality level.

The plot, on the other hand, is convoluted and sometimes confusing while the main characters, with one or two exceptions, are not so well drawn as they were in Zig Zag. The supernatural horror element is also weak and never makes the reader feel shivers all over his body as it happens in Somoza's other novels. The pacing of the story is also a bit flawed and uneven while the finale, though not entirely unsuccessful, it is as ineffective as the whole plotline. When I bought this title, I thought that, regardless of its length (nearly 500 pages), I would devour it in one or two sittings. Unfortunately, I didn't find this book engaging enough to do something like that.

Of course, the above criticism in no way is intended to claim that Jose Carlos Somoza is not an excellent writer whose work defies the strict genre classification as it borrows elementσ from crime fiction, horror, mythology, drama, etc. For those who are not familiar with the Spanish author's work, I would recommend beginning with the excellent Zig Zag that managed to mesmerize me. I should also add that my precise rating is closer to 3,5/5, but I am an avid supporter of one to ten scale as I believe that it offers the reviewer(s) the opportunity to be more rigorous and fair with the authors and their works.