This movie is just delightful and proves that the Danish cinema is on the very top of today's European silver screen productions. Jakob Cedergren is terrific in his role as Asger, a suspended police officer awaiting a trial for a wrongful shooting who has been temporarily transferred to the dispatch call center of a Copenhagen precinct. He takes a call from a clearly distressed woman who tells him that she is abducted and she is on the car with her abductor. Asger tries to help her and the plot begins to thicken in this suspenseful, Hitchcockian thriller.

The movie is shot exclusively in the police call center and Asger is the only protagonist, so it completely relies on its great script and wonderful dialogue. The call that sets off the story will signify the beginning of Asger's existential journey to his innermost self. As the plot unravels, we learn that he did something really bad but the director chooses to not reveal the exact nature of his crime till the film's ending. In the last scene, Asger finds the long-desired redemption through the confession of the truth about himself and a shooting incident against a civilian.

I found The Guilty (original title: Den Skyldige) to be one of the most interesting European thrillers of the recent years and I strongly recommended it to everyone who enjoys a really good thriller, in the tradition of the great master, Alfred Hitchcock. 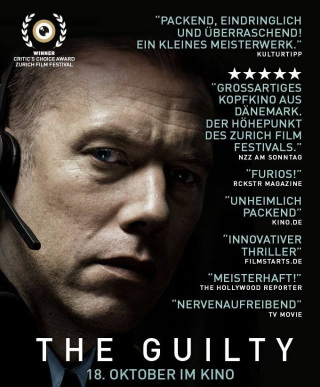