I am completing my Coen brothers revision with their most popular movie, Fargo, a picture that I've seen countless times in the past and every time feels like new. Joel and Ethan Coen write and direct a dark, gloomy and pessimistic Neo-noir film that casts some of the actors who appear in many flicks by the dyad such as Frances McDormand and Steve Buscemi.

There is a touch of black humor in the story of Fargo and the movie begins with Jerry Lundegaard (William H. Masey), a car salesman, asking two thugs, portrayed flawlessly by Buscemi and the Swedish thespian, Peter Stormare, to kidnap his wife to take the ransom money. Jerry is involved in massive-scale fraud and he needs cash urgently or else he will have to face the consequences. But unfortunately, Jerry is not built for this kind of endeavor so the plan soon goes awry and blood begins shedding in the small town of Brainerd in Minnesota. Police chief Marge Gunderson (F. McDormand) is the officer that investigates the case of a triple murder, committed by the two criminals who also kidnapped Jerry's wife, Jean. Well, I will not say any more about the plot so you could relish this excellent Neo-noir one-hundred percent.

Fargo is darker and gloomier if compared with other Coen's crime films and the cinematography is full of the dull color of snow mirroring the grey sky. Roger Deakins does a fantastic job, proving that he is one of the best cinematographers and his collaboration with the brothers has produced more excellent movies like Barton Fink, No Country for Old Men, and True Grit. The plot moves forward in a steady, rather fast, tempo and there is a total absence of redundant scenes or dialogue. It is a tight-plotted movie that counts on its memorable atmosphere, its imagery captured by Joel and Ethan's lens. The performances are also immaculate and the overall result is a film that it's deemed to be considered classic in the future. Any true-crime fiction aficionado ought to see this film and I can guarantee that they won't regret it. 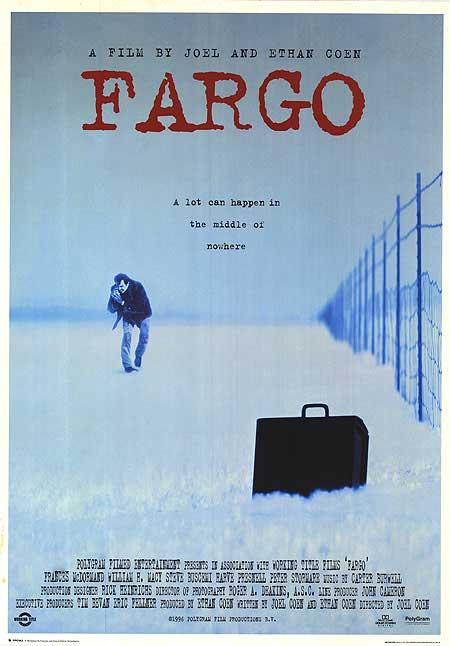